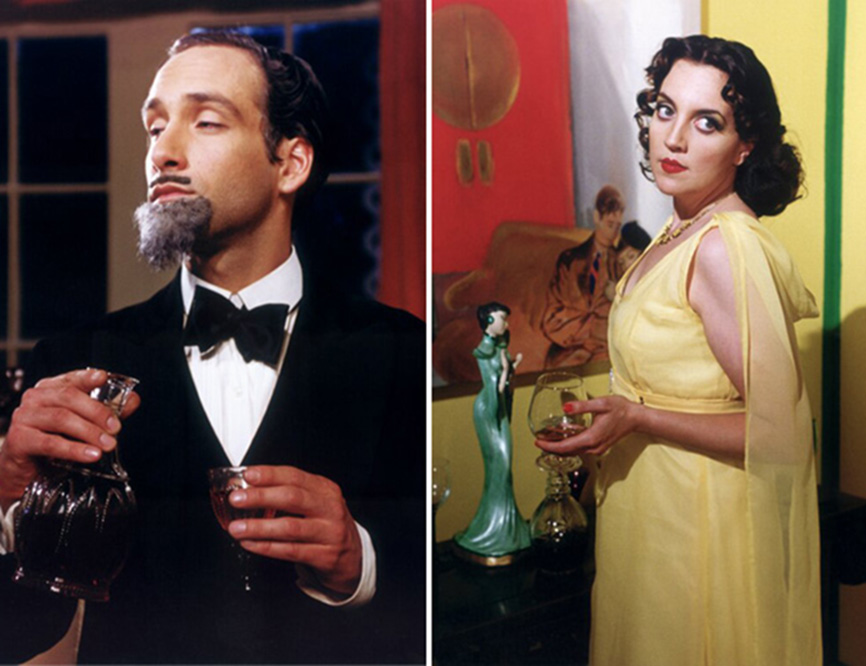 Mr Cooke dies, leaving his three spoiled rotten children (Nicholas Gilhool, Ariana Grace, and Jared Sanford) with an enormous inheritance. But there is one catch: in order to get their money, they are forced to live together forever. The three siblings detest one another violently and do nothing but bicker and try to torture one another all day. The oldest sibling, Charles, hires Dr. Schadenfreude (Garth Petal, a weird German doctor whose taste for evil is only surpassed by his love of money), to help him get rid of his siblings. Schadenfreude, however, has his own plans, and proceeds to use hypnotism, seduction, and criminality to turn the situation to his own ends. With exciting color, an outstanding cast, and original costumes and sets designed by director Anna Biller, the film is a sylish and witty tribute to old Hollywood Technicolor films.

The Hypnotist. I rarely ever exclaim anything out loud while watching a film alone at home. I mean, what if the neighbors were watching me through my window? What would they think? Well, the second the opening titles for The Hypnotist faded away, I let out a big "wow." Anna Biller and crew have managed to impeccably create the look of old glitzy Technicolor movies complete with vividly costumes sets and actors. The actors also deliver their performances in a very 1930's acting style. Try as hard as I could, I couldn't look past the visual presentation of the film to see it as a production from 2001. This completely looks like the real deal. --Eric Campos

THE HYPNOTIST (2001). Boasting a sly sense of humor and a truly impressive visual style, this is a charming 16mm short from director Anna Biller. THE HYPNOTIST is an accomplished homage to old, overheated Hollywood melodramas. When their father dies, three spoiled greedy siblings must all live together to inherit the family fortune. Scheming brother Charles (Nicholas Gilhool, in a wonderfully snivelling turn) wants to eliminate alcoholic tramp sister Beatrice (Ariana Grace) and religiously neurotic brother William (writer-producer Jared Sanford). To accomplish this task, he hires a sly German psychiatrist, Dr. Schadenfreude (Garth Petal), who'll use hypnosis to have them declared insane. It's a 45-minute overdose of murder, madness and manipulation, and if nothing else, this gorgeous film proves that underground productions don't have to look like crap. It has striking costumes (designed by Biller) and lavish production design, along with rich color cinematography, while its overwrought emotions and unreal style evoke the spirit of Douglas Sirk. --Steven Puchalski

As their elderly father lies dying, his children, Beatrice (Ariana Grace), William (Jared Sanford) and Charles (Nicholas Gilhool), can barely contain their contempt for one another. So, when the old man stipulates that in order for them to inherit any money they must live together under one roof, the scheming and backbiting start almost immediately. In The Hypnotist, writer-producer Jared Sanford and director Anna Biller have crafted an old-fashioned melodrama (think The Little Foxes with the camp turned even higher) that, set in the 1930's of classic Hollywood movies, brilliantly captures era details in its costumes, set design, even the crisp enunciation that stars once used to convey wealth and good breeding. With Beatrice vamping and cracking wise, Charles mincing about like a fledgling queen and the black-clad William all but sweating his spiritual angst, The Hypnotist is a riot.

Director Biller is clearly a student of '30's-era movies, as her campy melodrama (The Hypnotist) reveals. Her attractive costumes and set designs decorate this somewhat comedic tale that has the members of a catty rich family at each other's throats over who will end up with their dying father's inheritance. Enter Dr. Schadenfreude, a goateed hypnotist who plays these brats against each other like a Germanic Yojimbo. This sometimes claustrophobic work has a fine script by Jared Sanford, and a few inspired performances to its credit, contributing to its authentic, two-reeler feel.

THE AMAZING WORLD OF CULT MOVIES

The Hypnotist is a well-observed high-camp tribute to the hysterical melodramas of the 1930s directed by Anna Biller, whose mastery of mimicking the Technicolor excesses of old Hollywood can also be seen in Three Examples of Myself as Queen (1994) and the marvelous A Visit from the Incubus (2001). Lushly appointed sets and costumes as well as stylized '30s acting from its principal players make The Hypnotist seem exactly like a colorized Ted Turner version of all those shrill, talky Bette Davis potboilers of yesteryear. The plot concerns three greedy, selfish adult siblings whose dying father tells them that they must live together and take care of their sick mother or lose their considerable inheritance. That's when effete son Charles (Nicholas Gilhool) hires the dotty German doctor Schadenfreude (Garth Petal, who looks and acts like a hammy Lloyd Kaufman) to declare his siblings insane. Schadenfreude doesn't need much help with religious nut William (Jared Sanford, who wrote and produced), but has to hypnotize contentious sister Beatrice (Ariana Grace) into believing that she is a perverse nymphomaniac. Endless arguing in detailed period sets and costumes follows, to great comic effect. My only quibble is that, instead of her traditional '50s-style Technicolor, Biller may have been better advised to make The Hypnotist in the silvery black-and-white of most of its inspirations. With a script by frequent collaborator Sanford, The Hypnotist doesn't seem as personal as Biller's other films, nor does it contain their interesting examinations of feminism, but it is delightfully put together (Ariana Grace is especially authentic) and manages to amuse. --Robert Firsching

ANNA BILLER: LIFE OF A STAR. Writing, directing, producing, designing, choreographing, editing, scoring and performing in her own films, Anna Biller creates worlds dripping with style that pull their viewers into a Technicolor dreamland that not only serve as a feast for the eyes but as Anna has said about her film The Hypnotist, they can be “mild and pleasant.” “When I watch The Hypnotist, I get a strange feeling, like when you’re a kid and you have a fever and you watch some old movie and it doesn’t make any sense to you because you’re sick, and the colors and sounds just kind of wash over you.”

Focusing on personal and feminist issues set against old Hollywood, theatrical-burlesque, and mythical-allegorical backdrops, Anna has her own ideas on feminism and she’s not shy about parading them in front of you with films like “Three Examples of Myself as Queen”, “Fairy Ballet” and A Visit from the Incubus, which is currently being screened at the Chicago Underground Film Festival. This isn’t your typical feminist fare and for that, Anna has received mixed reactions – those that refuse to take her fantastical feminist theory seriously and those that can’t get enough of her stylish work. -Eric Campos